Please see the "Overview - Prizes" section for the prize summary.

This tournament is open to players of any age and any user that resides within either the UK or Europe.

The roster size for this tournament is limited to 2. The winning player can only receive prizing for two (2) player.

Please note that in order for prizing to be available a minimum of eight (8) participants must compete in the tournament.

For this tournament, players must register their Activision ID to their EGL Game & Social Accounts section on their EGL profile. All Player IDs on a team’s roster must be 100% valid and accurate. Spelling, spaces and characters must be exact, but do not need to be case sensitive. To find your Activision ID go into the game and select Options > Account > Activision Account.

If your username is found to be incorrect or you have input an email address instead of your Activision ID then you will be disqualified as this is strictly NOT allowed.


All matches are to be played using the following settings:.

The Grand Final will be played over 2 Maps. Kills from Map 1 will be carried over into Map 2, then the team with the most kills overall wins the Match.

This tournament is cross-platform meaning that PC, PS4 & Xbox One players are all permitted to compete. Both Controller and Keyboard/Mouse are permitted also.

Either of the players can set up the match as the game is played on dedicated servers. The host must select Warzone - BR Duos and change "Squad Fill" to "Don't Fill". Once this is done the hosting player will then invite their opponent to the game session and start matchmaking.

The player with the most kills at the end of the game session will be awarded the win. If there is a tie in kills, then the user that had the most overall damage wins. In the event that total damage is also a Tie the Player which survived the longest will be declared the Winner. Once the game has finished and all players are dead or the game was won you can get match evidence by going back to the lobby and selecting Match Summary - Scoreboard. Each team should take a screenshot or picture to show who won, example: 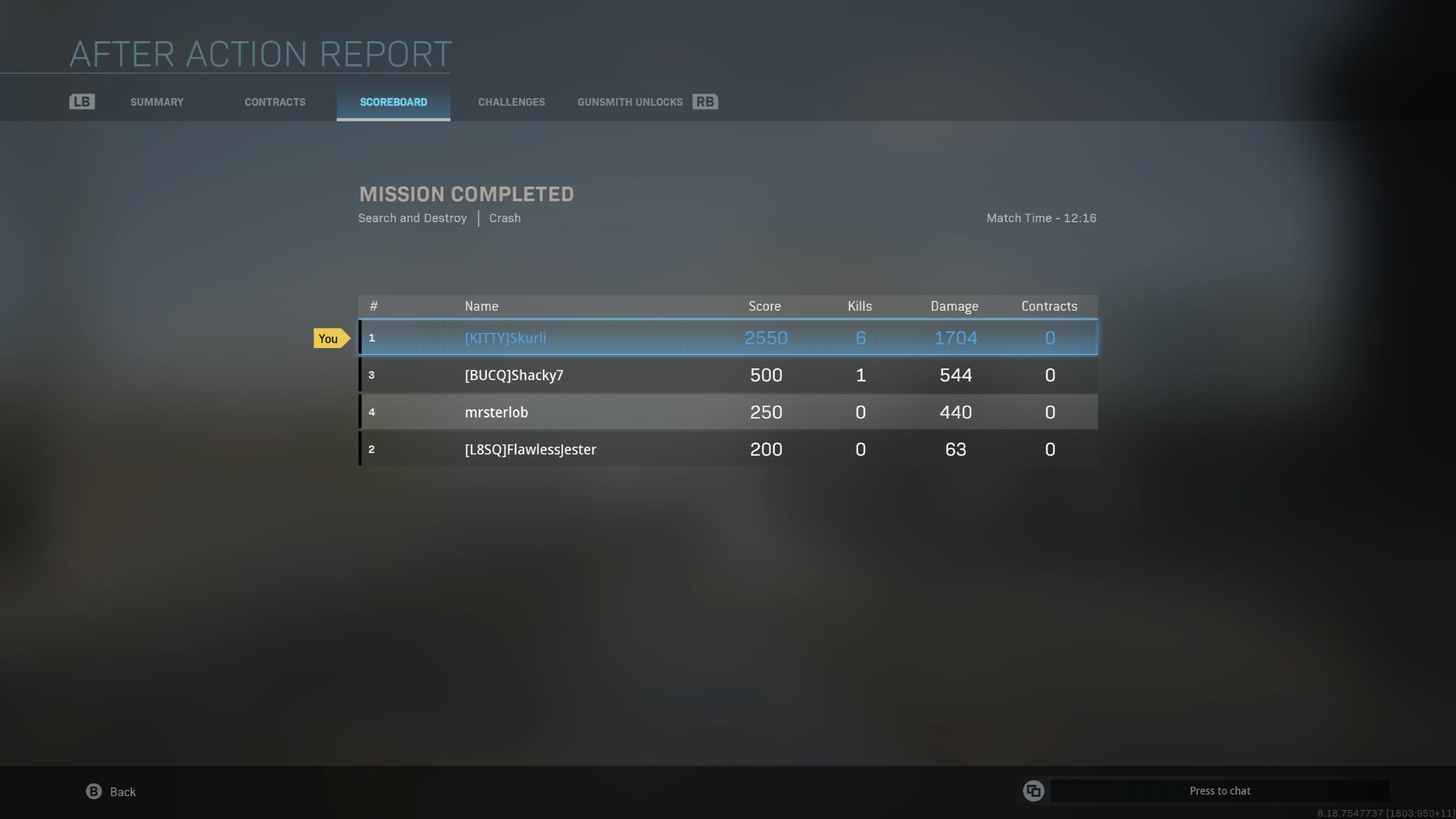 
Players will join a Battle Royale match with their opponent. The players that have queued up together are NOT ALLOWED to contribute/cause the death of the player they're competing against within that game.
Players caught doing so will be disqualified from their match.

It is the hosting player’s responsibility to ensure that the match settings are as outlined above in the Match Settings. If you notice that the host has the incorrect match settings, please record video proof of what is wrong, ensuring that the scores, time, incorrect rules and/or the players in the lobby are clearly visible (depending on the accusation) and then immediately report this to the admin.

In the instance that the hosting player has the correct match settings and you leave the game before it is completed, the player that did not leave will receive the win for that match.

If a player disconnects during the initial launch of a map, the map will be restarted from scratch. The initial launch is defined as the time before ANY points are scored by either player within the current match.

If a player disconnects after points have been scored by either player, the player with disconnection issues can continue playing with one player or forfeit the round.

Matches must be played in their entirety unless both players agree to delay the match. Maximum permitted time to delay a match is fifteen (15) minutes.

Failure to complete a match or report the scores within 50 minutes of receiving the match fixtures will result in disqualification for both players due to inactivity.

As this is a Battle Royale game played on dedicated servers, we don't formally distinguish between hosts for this tournament. Both players should take the initiative to invite and/or message the other players about the game setup. Failure to do so can result in a forfeit.