This tournament is open to players of any age and any user that resides within either the UK or Europe.

The roster size for this tournament is limited to 1. The winning player can only receive prizing for one (1) player.

Please note that in order for prizing to be available a minimum of eight (8) participants must compete in the tournament. Please see the "Overview - Prizes" section for a full break down on the prize summary.

For this tournament, players must register their Snooker ID to their EGL Game & Social Accounts section on their EGL profile. All Player IDs on a team’s roster must be 100% valid and accurate. Spelling, spaces, case sensitivity and characters must be exact.

If your username is found to be incorrect or you have input an email address instead of your Snooker ID then you will be disqualified as this is strictly NOT allowed.

Only players listed on the Match Fixture page are eligible to play in tournament matches. It is both players responsibility to verify the eligibility of all players playing in the match. If a player is not the player listed on the roster for that match, they will forfeit the match. Proof must be shown to support any claims of an ineligible player playing in a match.

If the opposing player has an ineligible player present, you must tell the opposing player to play on the account listed on the roster. You must have given the player the required fifteen (15) minutes from match start time rectify this. If the player does not rectify this, please report the scores in your favour and provide proof of the ineligible player in the game lobby.


All matches are to be played using the following settings:

A match is defined as 1 Frame, the winner of this frame will advance to the next round of the tournament.

Users must give evidence of the scores/match result of each match by taking a screenshot at the end of the match. Once you have done this upload the image to either Imgur, Prnt.sc, Photobucket, Twitter (tag @EGL_Europe), imgbb.com or Imageshack. 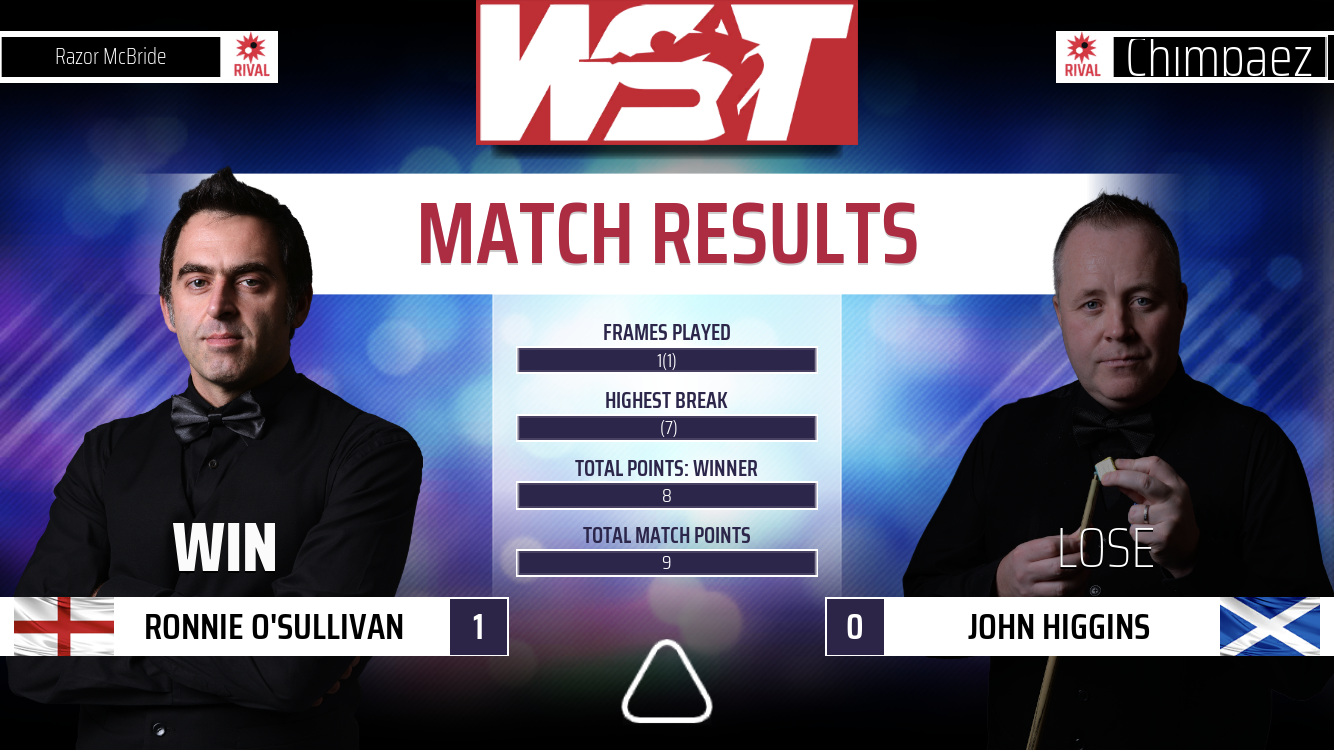 Matches must be played in their entirety. Maximum permitted time to delay a match is fifteen (15) minutes.

Failure to complete a match or report the scores within 35 minutes of receiving the match fixtures will result in disqualification for both players due to inactivity.

This is a tournament for the beta online mode of the mobile game Snooker, there are known bugs and exploits.

If a game becomes unplayable before a player reaches a score of 73 then the two players are required to restart the game. If a player has 74+ points and the game becomes unplayable then they the leading player will be advanced to the next round. EGL staff will make their best judgement with the evidence provided if this is needed. It is required for you to finish games, where possible.

EGL and Snooker welcome feedback on the online mode and tournament setup.

A match is defined as 1 Frame, the winner of this frame will advance to the next round.

The higher seeded player will be the host. A players seed is indicated by the number next to their name on the tournament bracket. The highest seed is defined as the player with the seed closest to 0.